Business is often described as “dog-eat-dog” or “cutthroat.” Rarely, in this country, is it considered common to lend a hand to the competition. 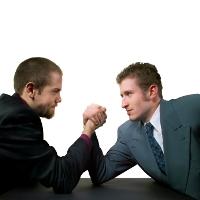 tend to be stronger themselves. I remember an anecdote in that story of a businessman who owned a machine used to bore tunnels. He went so far as to buy a second and open a second business to compete with his original endeavor. In the end, he discovered that his original business outperformed itself compared to before it had competition.

Over the last few years, there has been a shift in the outlook of many entrepreneurs dipping their toes in the commerce pool. The concept of the “Social Enterprise” has become a measurable movement. So real is the idea that state governments like those of Massachusetts and Illinois have begun enacting legislation to foster those businesses with an intention to improve the common good on top of making a profit.

Last week I ran across the story linked below in the July 26 Detroit News. It discussed a phenomenon I am happy to witness, but somewhat stunned to discover. It notes the relationship between some competitors in Detroit to lend each other a hand; in one case, one business basically gifted some decor to another in a neighborly fashion.

I haven’t seen the likes of something like that since I was involved in the advertising community of Detroit around the turn of the century. In the late 1990’s W.B. Doner, the largest independent ad. agency in the country at the time, had its headquarters devastated by a fire.

In response, the Detroit area ad. community donated personnel space and meeting rooms so that Doner could continue serving clients. The rebuilding process lasted more than a year, and Doner survived because its competitors recognized the value of having Doner among its ranks and put themselves out to preserve a rival agency.

Here at Gadd Business Consultants, we are interested in this phenomenon. Have you ever reached out a friendly hand to the competition? Have you ever been offered a life-line when in need? Lastly, do you think this is a Detroit or Midwest trait, or does it just happen randomly?

It’s Who You Know

Filling in the Gaps